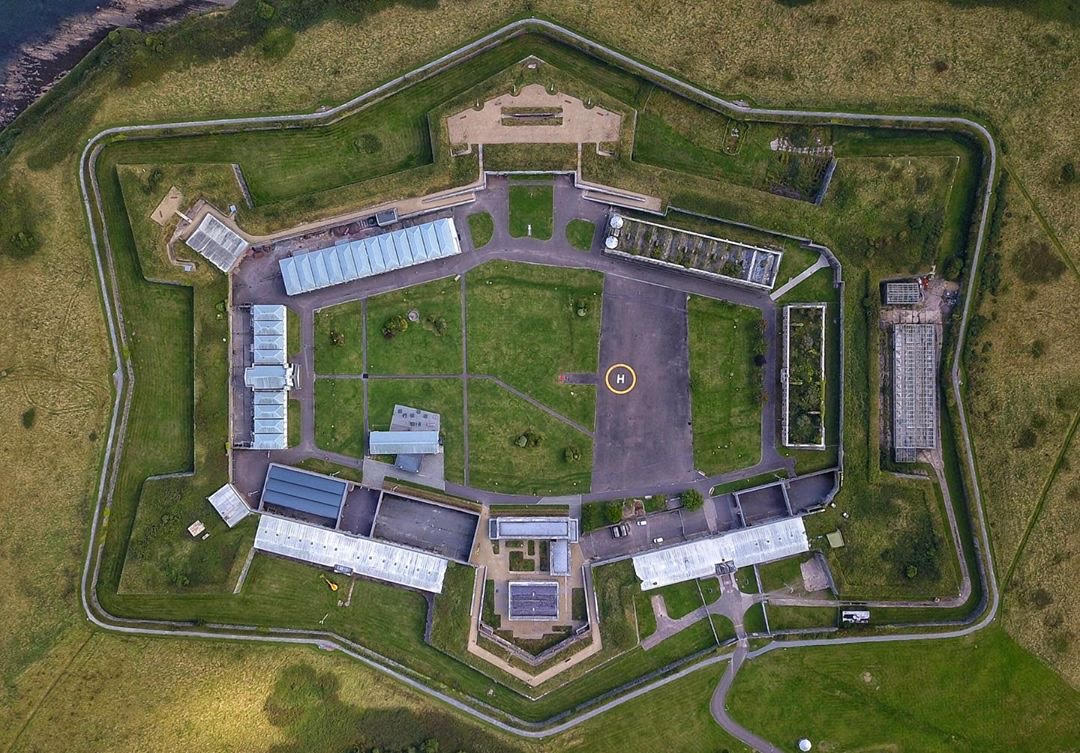 The first fortification was built on Spike Island in 1779 while the American War of Independence raged and the Kingdom of Great Britain was on high alert.  Over the centuries many superpowers had attempted to invade England and ‘The kingdom of Ireland’ was seen as a back door for invasion.  The great sail ships of the age and the global outlook of these modern superpowers made Cork harbour a very important asset, with its ability to shelter entire fleets within its confines.  This asset had to be protected had to be protected and no less than 3 forts would eventually guard the mouth of vital Cork harbour.

The first fortification on Spike Island consisted of a battery of cannons but this was replaced by a sizable 10 acre fort named Fort Westmoreland in the 1790’s.  Its designer was the colourful character General Charles Vallencey, a great character of his time who was an excellent engineer, an early Irish historian, a prolific writer and he also had 4 wives and 14 children!  He was well aware of the need to defend the Empire from seaborne attack and he had spent time living in heavily fortified Gibraltar where he also studied the defences of Malta.  While the first fort was not insignificant he soon felt something even more deterrent was required and the emergence of Napoleon and a bitter war with France created the drive and availability of funding for protection.  Permission was given for a behemoth of a military structure that stands tall to this day.

The 24 acre star shaped Fort Mitchel that was started in 1804 is one of the largest of its type in the world and it was the cutting edge of military technology when it was completed around 1850.  The designers chose the distinctive star shape design which had long replaced the old straight walled design of Norman castles, which were big and impressive but an easy target for ever improving cannon fire.  The star element emerged around the 1500’s in Italy and it was used in cities like Pisa and by Michelangelo in his defence of Florence.  The points of the star shape meant that defenders had overlapping arcs of fire over all parts of the island, making the whole island one effective kill zone.  Should an enemy survive the run up the steep man made hill side known as a Glasis and get close enough to the fort, flanking galleries were built into the sides of the bastion providing firing positions for defensive troops to fire on enemy troops.  These flanking galleries were infantry firing position set into the forts walls with narrow firing ports, which enabled defenders to fire on approaching enemy troops from relative safety.  The whole fort itself was built with a low profile, setting it down into the islands summit in such a way that it can barely be seen by approaching enemy troops.  This made it very difficult to target the fort with cannon fire from ships in the harbour or small arms on the ground.  The British engineers shaved over 25 feet off the top of the island to achieve the feat. Well over a million Pounds was spent on the structure which would be between 500 million and a Billion in today’s money, putting the structure on a par with modern super stadiums.  While the roof at Wembley stadium covers 11 acres, the fort expands to an impressive 24 acres, just shy of the 28 acres of the American Pentagon with its 26000 staff.  The vital strategic importance of Spike Island was being recognised in a fitting way and it would be for the next 250 years, with Winston Churchill declaring in 1938 that the island and similar defences at Berehaven and Lough Swilly were “the sentinel towers of the approaches to Western Europe”.

By 1820 the main work of the walls, bastions and some accommodation blocks were complete, before the funds dried up for military building entirely.  By this time an impressive fortress had emerged fit to defend Cork harbour.   On its completion the Fort was capable of garrisoning up to 3000 men, but as a result of the famine years in Ireland it also had to hold prisoners from 1847 to 1883 in addition to its military garrison. After 1883 it returned to British military use with Colonel Percy Fawcett a famous serving soldier.  When Ireland gained Independence in 1922 Britain insisted on retaining the vital fort as part of the peace Treaty.  It was 1938 before the island and fort was given back to Ireland as part of negotiations around a trade war, and Éamon de Valera watched as the Irish  tricolour was raised for the first ever time over the fort.  The Fort was renamed from Fort Westmoreland to Fort Mitchel following Irish Independence, after the Irish Nationalist John Mitchel who was a prisoner on Spike Island in 1848.

Today visitors can go through the forts impressive entrance walls to the enormous parade ground inside, and many of the original buildings and tunnels can be explored as part of you visit to Spike Island Cork.  The fort is so large it could fit the Colleseum of Rome inside its walls 4 times over, and modern sports stadiums and the whole of Alcatraz island could fit inside!